Our loveably hated little dog Smokey has a run in with a Dole Banana in this first of a handful of promotional videos for our new record coming out next month Long Now.

Smiley with a Knife is bracing for the release of their second album, Long Now, due out August 17, 2010. Long Now may not be a bubblegum chew of a listen, but perhaps you’ll tap your toes, clap your hands, bob and sometimes bang your head, dance with your broom, or your lover if you’re so fortunate, or simply lay on your bed and say “Ahhh…”

What Long Now has in store for fans and newcomers is smoky steam ceilings, sucker punches, wild bull rides, cyclonic summersets, and moments for breath catching, screams, and whispers. Forget the monochromatic gray blob that casual listeners hear pushed from post-rock's loins. Toss the calculator required to decode the algebraic hieroglyphics of prog-rock's textbooks. Don’t look for the conventional Explosions in the Sky or Don Caballero -isms here. Smiley is not about twisting listeners’ ears into Eagle Scout caliber knots only to serve you more of the same. There is something for everybody in Smiley with a Knife's Long Now - even for those who may not fancy themselves contemporary instrumental rock enthusiasts.

Since their first release in 2008, How A Reign Comes To An End, New Orleans’ instrumental rockers Smiley With A Knife have diligently defined the teeth of their knife blade – their sound.  Smiley’s Reign combined the hook-soaked cascades of Justin Vicknair’s sonorous guitar, the serpentine electricity of Patrick Bailey’s tap-guitar, the bubbly loping of Michael Volpi’s bass glides, and the sly, classy hits and shimmers of Jared Marcell’s drumming. Throughout the album’s ten tracks, they balanced the light with the dark, the limpid with the muddy and the airy with the stormy. The pieces were there; noise was hammered into a characteristic sound quality.

With progress comes the process of refining, sharpening, and cutting away. Serrations can dull after many cuts, slices and chops: the once pronounced grooves can wear down to blunted teeth.  A knife bites most strongly when it has been meticulously preened.  With a sleek body and fine point – serrations carefully sharpened – a knife has the potential to gnash through bone.

Long Now is the trumpeting of an emerging voice honoring the influence of other like-genre bands while asserting the resolute musical self-realization of four individuals who are carving a meal at the family table.  Smiley with a Knife clearly displays a knack for whimsical charm and a penchant for winsome playfulness.  But lurking underneath the lightness and the effervescence is a striking seriousness. No; the serrated teeth have not weathered.  The Knife has been remolded at the smithy. Whereas Reign was a collection of confidently composed songs, Long Now is a family.  Smiley’s new eight song recording represents an assiduous progression from four eager experimentalists to four more mature, musical minded players.  Simply put, Smiley with a Knife’s Long Now has one primary intention: listener, we want your sisterhood, your brotherhood; come with us; welcome to our family.

Smiley with a Knife's Long Now will be available for download from iTunes and BandCamp on August 17th.
To contact Smiley With a Knife email Patrick at smileywithaknife@gmail.com 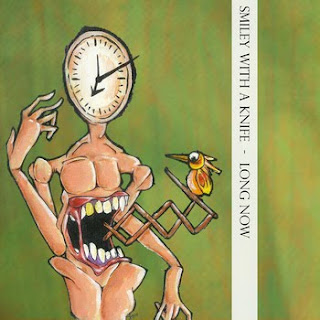 Contact: smileywithaknife@gmail.com
Posted by LoOmis at 9:23 PM No comments: