Battle with the Flu

Hello internets world.
Pull out your fruity drinks, kick your feet back, and let us tell you a thing or two... 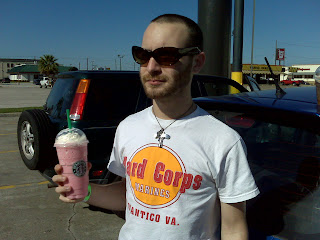 Our story begins in a place not so far away, in Anywhere, USA - a place called Katy, Texas - where the Smiley with a Knife boys stopped in at a Starbucks for some refreshments on their treck to South-by-SouthWest in Austin.

Deciding that a caffienated beverages would displease him, Jared decided he'd rather some juice. And so while wearing his girlfriend's sunglasses over his regular glasses and wearing a quite ridiculous Marine Corps shirt with a horrible pun sprawled across it, he thought it a fine idea to order a Large ("We don't have large," said the passive-aggressive Starbucks employee) Strawberries and Cream - under the impression that it was going to be strawberry juice with coffee creamer in it.

Oh, mocking ensued as he looked like the most fabulous log-cabin Republican of them all.

But all joking aside, Smiley with a Knife got back from SXSW earlier this week where we played a New Orleans showcase with our friends Magic Legs, Man Plus Building, Hat Talk, I, Octopus, and Caddywhompus among others. It was great fun. We squeezed ever-so-tightly into Snake Eyes Vinyl on the east side of downtown. 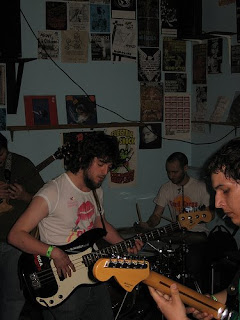 The rest of the time we spent there, we got to see Tera Melos twice and Maps & Atlases too! Both of those bands are heroes of ours, and we want very badly to be associated with the Sargent House group that they are on. Maybe one day, but it's not entirely necessary for us to chase after.

Aside from that, Volpi and Jared got the chance to see Look Mexico, Constants, and Caspian at Plush, the holiest-in-the-wall-iest venue that any of us saw in downtown Austin. That's kind of sad, because some of the places that we've played make Plush the Austin venue look pretty damn plush.

Oh. It's probably also worth mentioning that we saw one of the worst bands ever in the Pita Pit that we ate at while we were there, too.

Anyway, we were looking forward to playing in Hammond on Saturday night, but both of our guitarists came down with the flu. To all ye Hammond folk, we apologize profusely. We will reschedule and have great times and profound laughter. It was pretty bad, though - neither of them made it to work on Monday and we had to cancel our Sunday show at the Dragon's Den with buzz-machines DD/MM/YYYY as well.

Hopefully Pat and Justin be better by the time our show with Unwed Sailor comes around next week. Speaking of which, that's going to be March 31st at the Dragon's Den, 10p, with NeckBeard.

Smiley with a Knife has the ingredients of a New Orleans institution. Raised in Algiers, childhood friends Michael Volpi, Patrick Bailey, and Justin Vicknair have been romping around the Westbank as or with members of New Orleans’ punk/ska legends Fatter than Albert for years. During Fatter than Albert’s 2005 summer tour just one month before Katrina, the three agreed to an experimental project that for nearly two years hosted a rotating cast of temporary drummers. When the group recorded at Loyola University in the fall of 2007, they recruited the recording session engineer, native New Orleans drummer Jared Marcell, to permanently fill out their lineup. Marcell, a Loyola Music Industry Studies student at the time, graduated the following year with a management position at the Music Shed recording studio and rehearsal facility already in store. Smiley with a Knife as it is today was born, and since then the group has managed to successfully sear its own brand of quirky yet sleek instrumental indie-rock compositions with a uniquely New Orleans flair.

Smiley With A Knife's first full length, How A Reign Comes To An End, debuted in November 2008 and has garnered praise from local and regional press. On their behalf, there has been a tireless effort to unite the instrumental groups of the South East into an organized regional movement. With the beginnings of this instrumental armada, Smiley With A Knife initiated the first annual New Orleans Instrumental Fest in March 2009, a week before their performance at SXSW. Aside from their impressive local allies, SWAK has had the honor of sharing the stage with such traveling talent as Unwed Sailor, Tera Melos, Native, HEALTH, Maserati, Arms & Sleepers and Caspian.

While instrumental rock certainly is not a novelty by any means, it is indeed a refreshing medium that has taken a strong hold in New Orleans, and Smiley with a Knife has lead that charge in recent years. Sans singer, instrumental musicians cannot hide: they can't cheat or "pull a fast one." The sounds that radiate from bare, basic instrumentation will collapse if not buffed and buttressed by true musical ingenuity. Smiley with a Knife has pondered these tenets and faced these challenges head-on. They brew together the classic with the new, lithely striding along with sonic hooks and anchors to keep their fans and “to be” fans captivated. They blend the upbeat, joined-at-the-hip bass and drum combo mastered by bands like the Meters with the chilled demeanor of a definitive modernity established by bands like Explosions in the Sky and Maserati. The skills of Patrick Bailey (guitar), Justin Vicknair (guitar), Michael Volpi (bass), and Jared Marcell (drums) lie in their ability to pay homage to their influences and forbearers without reinventing the wheel. Their innovation stems from their ability to temper their more jocular, tickling tunes with other more eerily emotive numbers.

In August 2010, Smiley With a Knife released their new album, Long Now. People say it's awesome.
Posted by jmmarcell at 10:02 PM No comments: