Our Monday show with Tera Melos, Caddywhompus, and NeckBeard was great.
That Nick Reinhart fella is a pretty photogenic guy. We were able to sneak this photo of him: 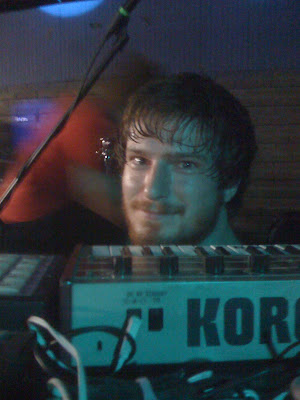 We played our asses off to a lot of new faces, which can mean only one thing - you guys have been spreading the word. Keep up the good work, 'cause we're going to need you to continue. We've got some really cool ideas coming up for you guys to chew on. Just you wait 'n' see!

What's next for us, though?
Well, since we've penned two new songs recently, we need to keep it up while we're on a roll. We know you guys aren't quite finished digesting How a Reign Comes to an End, but we've decided to go back into the kitchen to bake up some dessert.

We're playing one last show at Tipitina's with A Living Soundtrack and Antenna Inn (see the flyer below). That show is on May 14th, and it looks to be scrumptious. 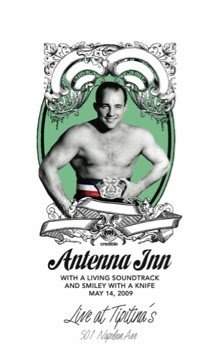 After our Tip's show, we're going to be taking a break from the rigorous show schedule we've been keeping to write some new material. Expect to hear something a little faster, a lot thicker, a tad more epic, and a bit more conversational. You'll be in for some tasty digs - trust it, trust it.

Expect our show schedule when we return to be filled with wonderful new ideas and more diverse and exciting lineups.

Before we take this moment to creativise, we'd like to thank our sponsors:
- Every Louisiana and Texas instrumental band that we've met, helped, and been helped by over the past year and a half
- The Music Shed who has been gracious, generous, and enormously crucial in fostering nearly all of our productivity
- Our families and girlfriends who sacrifice quite a bit to help us make this all happen
- Jenny and Smokey for... being dogs... 'cause we love dogs
- And most importantly, You - for showing us unbelievable amounts of love and support, for being open-minded and willing to try new kinds of music, entertainment, and art, and for thinking that our wacky shenanigans are amusing and worth being a part of

We'll be posting more about the Tipitina's show soon. Until then, stay cool.
Posted by jmmarcell at 11:50 PM 1 comment:

An episode of MTV's Cribs 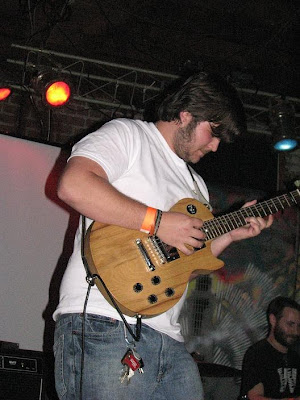 We're over here at the SWAK house waiting for Justin to come back from a hunting trip. He's got a caveman-looking club thing that he keeps in his car at all times that he claims is meant for hunting wild boar. Crazy. We're not sure if he uses only that club to hunt these huge beasts, but we're cool with it as long as he comes back with all of his fingers working.

Anyway, once our very own Ted Nugent comes back, we'll be heading off to practice to gear up for our opening set tomorrow. Not just any opening set, though. We're opening for TERA MELOS!

This show is going to be amazing.
Tera Melos puts on an action-packed show. Nick Reinhart's pedal trickery is a finely choreographed rain dance that seems to work every time as bassist Nathan Latona and newest member drummer John Clardy drip-drop syncopation from every pore of their being. Look them up on YouTube to get an idea of how crazy these guys are. They make it rain. Like woah.

With this wonderful opportunity comes a note of sad news, though. Our friends in Good Day for an Air Strike will be hanging their hats up after this show. If you've never seen them before, this will be your last chance to catch it.

This show is all ages and the rock solid lineup is as follows:
Doors at 6:30
Caddywhompus hits at 7p on the stage
NeckBeard barrels through next on the ground
Good Day for an Air Strike takes the stage for their final set
We'll do the pee-pee dance with you on the ground before Tera Melos destroys the stage with a bang and a splash.

In other SWAK news, we're in a bit of a transition phase right now.
As many of you may know, Jared's mother moved out of his house. Then Pat & Volpi moved in. 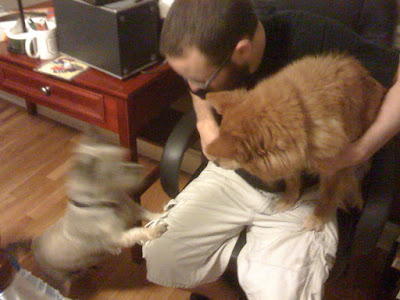 Along with Pat came Smokey, the grey Cairne Terrior on the bottom left, and along with Jared stayed Jenny, the red fox-looking Finnish Spitz that Jared is holding. We've got 6 TV's in the house due to varied circumstance, but they've gone greatly ignored because we've had so much fun watching these two characters interact.

Their only beef with each other comes at dinner time or when some owner-dog loyalty issue arises. Other than that, we've seldom had to exercise our conflict resolution skills.

We have a YouTube clip up right now that documents their first encounter with each other. Go check that out if you get a second.

Who wants to see the rest of the house? 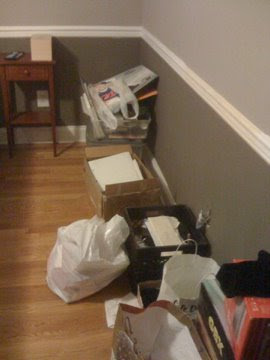 Jared only moved 1 room over; however, he's still living in a bit of disarray. 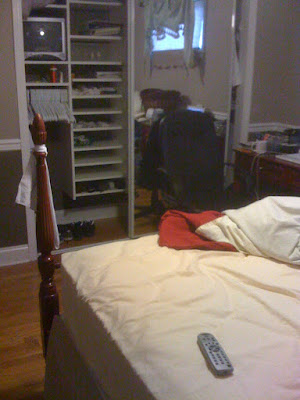 He's the only one with an actual bed, though. 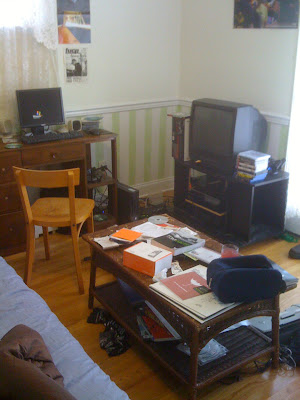 Pat is settled in with his PS3 and direct access to the backyard. 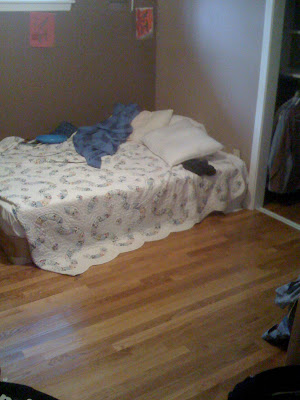 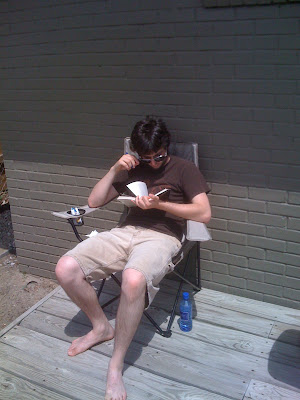 With all of the computers, TV's, dogs, and moving, he prefers the backyard and some non-required philosophy reading. Let's take a moment to make fun of him.

Mmm, Nietzsche!
Dork.
Nice water bottle ya got there.
Dork.

Just you wait. We'll have a whole post of Justin's greatest hits: a revue of portraits au la Volpi. He'll be thoroughly made fun of soon enough. 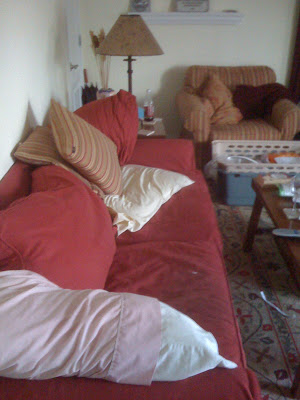 Speaking of Justin and living simply, Justin doesn't pay any rent, but he'll be living HERE quite often, most likely.

The only truly clean part of our house right now is the backyard: 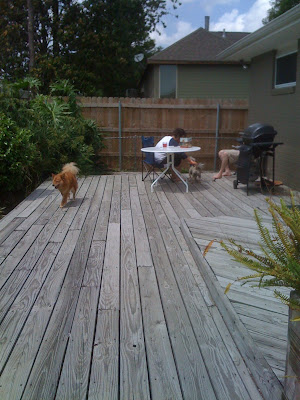 When we get settled in completely, we'll probably do a lot of video blogs back here.

If you need absolute proof that we're not settled in yet, there's still a lot of crap in our poor kitchen. :( We'll be putting in a lot of time here after practice to clean up, organize, and take tally of what we need to properly operate: 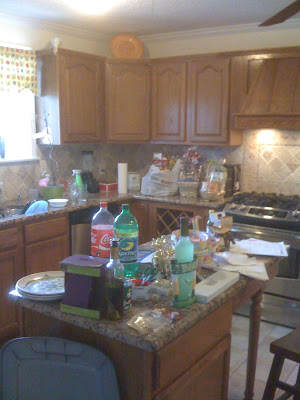 That's the closest to MTV's Cribs you'll get out of us. We'll try to get back to you on Tuesday with a re-cap of the Tera Melos show. Until then, try to stay cleaner than us and we'll work on the same.
Posted by jmmarcell at 2:01 PM No comments:

Last weekend was nuts. We opened up for Unwed Sailor and played in Lafayette... oh, and we played in Rob Landry's above-ground basement for his birthday.

Let's see here...
I've got a video from the Unwed Sailor show for you guys. It's right here:


When we went to Lafayette, A Living Soundtrack came with us. Perhaps it was their "scooby-doo song" floating in the air or the free coffee and cheap beer that Caffe Cottage offers to bands, but there were a lot of biscuits consumed on this outing. Where better for biscuit's than Mel's diner in the heart of Lafayette? 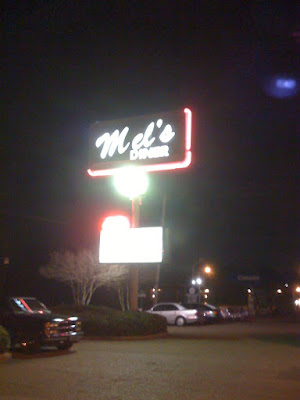 The ALS crew sat right in front of the dishwasher and made his job easy. 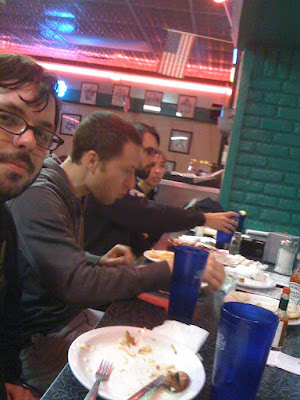 Clean plates o-plenty, and a badass shot of the four of them, too!
We ate more biscuits on the way home the next day at Cracker Barrel, but since all Cracker Barrels are the same, we felt no need to show you any pictures.

When we got back in town, we ran over to Rob Landry's for his birthday.
After we played a few of Rob's favorite SWAK songs, he tore the house down with his band NeckBeard. We took this very demon-like photo of him at the party: 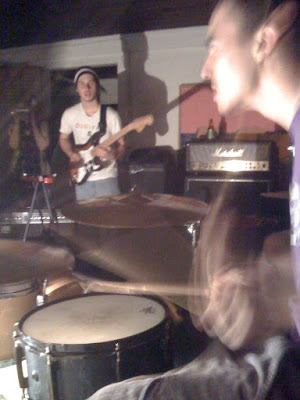 By the way, if you haven't heard NeckBeard yet, they're super badass and you need to check them out. They're playing with us at the Tera Melos show (Monday 4/27 @ the HighGround) and at a show that our friends over at Southern Soundscape are putting on Friday at the Dragon's Den.

Speaking of this week at the Dragon's Den, we'll be playing there Thursday with Pumpkin and High in One Eye. That show starts at 7p. Do it.
Posted by jmmarcell at 1:47 AM 1 comment:

WE'RE OPENING FOR TERA MELOS!!!!
My girlfriend hates them, and understandably so because they're loud, fast, spastic, and make me drive like a maniac. And that's exactly why all of you in the rest of the world out there should love them.
Here's a live performance video with their new drummer, who - by the way - was INCREDIBLE at both shows that we saw at SXSW:


Anyway, March is over and April is now upon us.

Oh, what what... Our show with Unwed Sailor was great. Those guys are always a blast, and we're super stoked about being able to play with a group that we look up to so much. We took some video of that, which we'll be posting soon. Our boys over at Southern Soundscape will probably be posting some video of that soon as well.

Speaking of posting media to this blog, that should get a whole lot more frequent and easy from now on as I (Jared) have an iPhone now. Fancy shmancy pantsy, eh? Yes.

If you're going to be in Lafayette tomorrow (Friday, Apr 3rd), go to Caffe Cottage. We're going to be playing with a Living Soundtrack and Magic Legs. It will be sick, and you'll love it.

EDIT: hmm... i guess it would help to tell you when the Tera Melos show is, right?
all of our shows for April are as follows:

And the BIG ONE: