All good things must...

The rumors have been spreading, and it's time that we lay the whispers to rest.
On May 13th at One Eyed Jack's, the four of us will be playing our last show together as Smiley with a Knife.

Enjoy this ridiculous flyer that Credible made for the occassion: 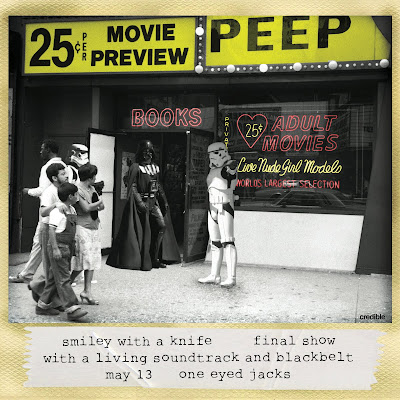 That's right, our final show will be with the Blackbelt Band and A Living Soundtrack.
We call that the OG lineup.

We won't be adding any additional shows to our schedule between then and now.

Before this final performance, we will be releasing two new recordings:
"The Real Party is On the Balcony" and "Aluminum Cannon"

Rest assured, there is no malignant source for this parting of ways.
The four of us are best friends, brothers, and fellow adventurers. Nothing about this has changed.
We've experienced the hippest establishments from Austin to Brooklyn and the coolest of hidden towns between. Your local beer has been great, your PBR, High Life, and Red Bull has been free, your gas has been expensive, and your couches have been reasonably comfortable. For those of you in the Gulf Coast region and various other facets of the deep South, you surely have not heard the last of our individual members. We'll meet again soon enough under the guise of (a) different band name(s).

Stay in touch with us. We aren't dying; we're just changing.

Pat will continue making music under his solo name LoOmis. You can find him on twitter @LoOmismusic

Jared will continue managing the Music Shed recording studio. The studio's twitter handle is @musicshed. You can also reach him there at jared@musicshed.net.
He will be playing (pretty much) every Sunday night with a band called Little Maker at Saturn Bar.

Justin and Volpi will each continue playing in some capacity. When their new projects get off the ground, we will be making blog posts and emails about these projects.
Posted by jmmarcell at 11:35 AM No comments: